With this grand Opening Symposium, the Berlin Institute of Medical Systems Biology celebrates its move to its new facilities in the city center of Berlin. CircRTrain students presented their projects at the poster session to the 400 participants.

The newly hired circRTrain young researchers met for the first time at the LOEWE Medical RNomics Symposium 2017 which was organised and hosted by Prof. Albrecht Bindereif from Giessen University, Germany. As part of their scientific training programme, circRTrain students attended presentations of the LOEWE Symposium’s speakers, including talks from circRTrain network partners, whereby they received insights about ongoing cutting-edge research focusing on RNA-regulated networks in human diseases. 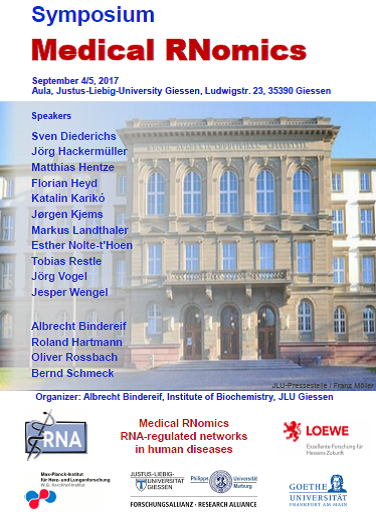 All circRTrain project leaders were invited speakers of the 9th Berlin Summer meeting dedicated to circular RNAs and RNA modifications.

Due to delays caused by the COVID-19 pandemic, circRTrain received an extension until Septemeber 2021.

All network partners were affected by the COVID-19 pandemic in March 2020 when public institutes were partially or completely shut down. circRTrain researchers immediately engaged in Corona related resarch and support local efforts with their expertise in gene regulation, omics technologies and data analysis.

This project has received funding from the European Union’s Horizon 2020 research and innovation programme under the Marie Sklodowska-Curie grant agreement No 721890.